Bend It Like Beckham: The Musical comes to Toronto with a Message of Joy and Affirmation for a New Generation 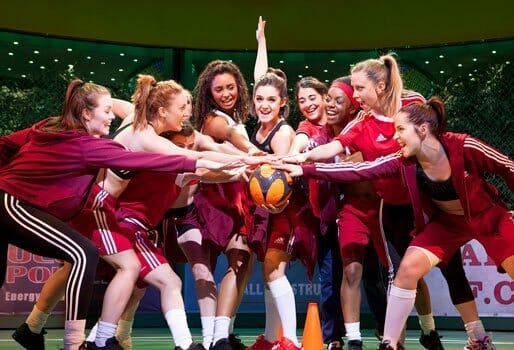 The two leading people behind Bend It Like Beckham: The Musical have only one disagreement about the hit London show receiving its North American premiere in Toronto this December. “I think it’s a feel-good musical,” insists Corey Ross, the Producer of Starvox Entertainment. “With its message of family connection and the empowerment of young women, Bend It Like Beckham is the perfect show for any family during the holiday season.”  Author-director Gurinder Chadha, who created the original 2002 film as well as its current adaptation, accepts Ross’s description, but goes further.

“It’s not just feel-good, it’s feel-great!” she enthused on a recent visit to Toronto. “It makes you feel wonderful about yourself, your life and choices you’ve made along the way.” This is certainly a project that has had stardust sprinkled on it from the very start.  When Chadha conceived her idea of a girl-power story set in the world of women’s soccer in the Indian community of London, no one would have guessed it would go so far. But the magic of Beckham’s name coupled with a solid story and the debut of two future major stars, Keira Knightley and Parminda Nagra, caught the fancy of the film-going public. The film grossed over $76 million worldwide, a tremendous showing for the first feature film directed by a British South-Asian woman.  Chadha believes that a variety of things made the film so popular. “I can tell everyone now,” she laughs, “the story was autobiographical. The only thing different was that I wanted to make movies instead of playing football. But what was more important was that I wanted to break the rules. I never wanted to be the archetypal Indian girl who wore Indian clothes and cooked Indian food. My mother used to wring her hands in despair about me!  “That was the world I grew up in. Everyone wanted to contain us as girls, as women. You can’t do this, you can’t do that. So many people saying no. That was the whole point of making a film about football. To show us a world of powerful, athletic young women.”

Still, one of the reasons Bend It Like Beckham continues to endure as a musical, as well as a movie, is that there’s a lot more to it than a message of female empowerment.  “It’s not just young women finding their place in the world against the establishment. It’s how they have to negotiate the journey with their families. “When parents impose rules on their teenagers, the parents see it as protection, the kids see it as keeping them back. It’s about keeping the love going between generations while young people try to work out their dreams.” When Chadha thought of turning her film into a musical, she was reminded of one of the greatest of all musicals, Fiddler on the Roof.

“Tevye has different ideas about the future than his daughters and the show let us see how everyone has to change a bit, bend a bit.”  Ross embraces Chadha’s analogy because he feels it underscores his belief that Bend It Like Beckham “is about the whole immigrant story, a living, breathing musical expression of who we are and what we are today.”  To Chadha, the decision to rethink Bend It Like Beckham as a musical allowed the show’s various elements to express their power even more strongly.  “I realized that I could tell a multi-layered story about ethnic and generational conflict by doing it all through music.”  Chadha’s instinct was correct. The British critics embraced the show, giving it the UK Critics’ Circle Theatre Award for Best Musical. Matt Trueman in Variety sounded a note many of his colleagues would echo when he said the show “works a lot better on stage than on screen.”

Despite critical raves and a successful West End Run, Chadha and company aren’t sitting on their laurels.  “Toronto will see a new version,” she proudly insists. Yes, we’re messing with success, but there’s a lot we can do to make it better,” and she speaks about a “more symbolic” set design and “better and more exciting choreography.”  Producer Ross is confident that Chadha’s new vision will be welcomed by Toronto. He points to our embrace of multiculturalism and the fact that the South Asian population of the GTA is 8%, the highest figure in North America.  He also references the fact that Canada has a highly ranked women’s soccer team, which will compete in the FIFA Women’s World Cup this June and this city’s love affair of empathetic musicals like Come From Away.  “It’s the perfect show,” Ross says, “for families to see together, for friends to see together, for mothers and daughters to see together, and for just about anyone who enjoys watching young people fight for their dreams.  “That’s why we’re opening it in the month of December, a time when many people feel the impulse to celebrate together.”

Chadha believes this show has a message of joy and affirmation for anyone who is willing to listen.  “There’s always a new generation of people that will need to be empowered.”